This dress was definitely a case of the fabric driving the pattern choice.  This is a purple/gray silky fabric with a ribbon-like texture from Joann Fabrics (you can still order it here).  Normally I don't advocate going out and buying pretty fabrics willy-nilly, BUT if you are drawn to a fabric over and over again on several fabric store visits till you finally buy it even though you don't know what in the world you are going to make with it, well, there are certainly worse things you could do with your money:) 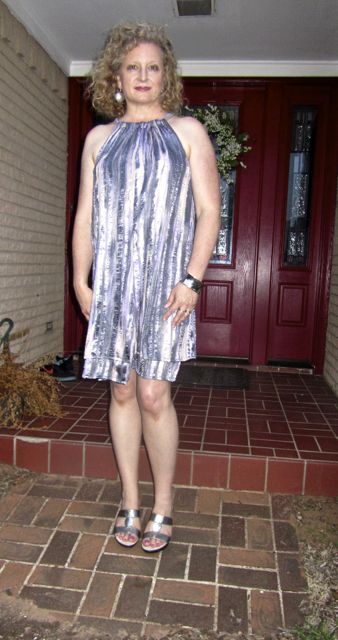 Sooo, after I bought this fabric it took me awhile to figure out what to do with it.  Because the fabric itself is rather complex, I wanted something simple but dramatic.  I thought about Vogue 1240, but it had mostly negative feedback on Pattern Review, and it was maybe a little TOO dramatic to get much wearing time.  But when I saw Barbara (of sewing on the edge) in her pillowcase dress the little wheels in my head started turning.  I did some searching of pillowcase dresses on pinterest and then I bought New Look 6119 to use as my starting point.

I really like this pattern.  I did make just a few changes (you knew that, didn't you?).  I cut a size 14 but added an inch to each side.  I sewed the front panels all the way up but left the keyhole in the back because I wanted to tie a big bow back there.
Because some of the ribbons in the fabric were sheer, the dress needed a lining but I didn't want to mess up the drape and the "floatiness" of it.   However, I ended up with quite a lot of leftover fabric, and while it is lovely, one project out of it is probably enough.  So I decided to just cut two dresses and layer them on top of each other.  This added a little time, especially since all the seams are French seams (a nice feature of the pattern), but it was worth it.

After making the two dresses, I treated them as one at the neckline, and attached the seam binding to both layers at the underarm (1/2" seam binding) and at the neck (1" double wide seam binding, which I opened out to give me more room).  I used a wider seam binding at the neck than the pattern called for because I wanted the neck tie to be wider and that gave me more room to thread it through.  Fabric for the neck tie was leftover lining from my lace dress.  I cut it 6 inches wide and maybe 90 inches long (as per here) then sewed it in half longways and turned it, then topstitched it.  Ninety inches turned out to be way too long so after I had it made and tried it with the dress, I shortened it.  I wanted to tie the bow in the back and have it be rather large, but I didn't want the tails to be so long that I would sit on them if I sat down.

Here's a lopsided view of the back: 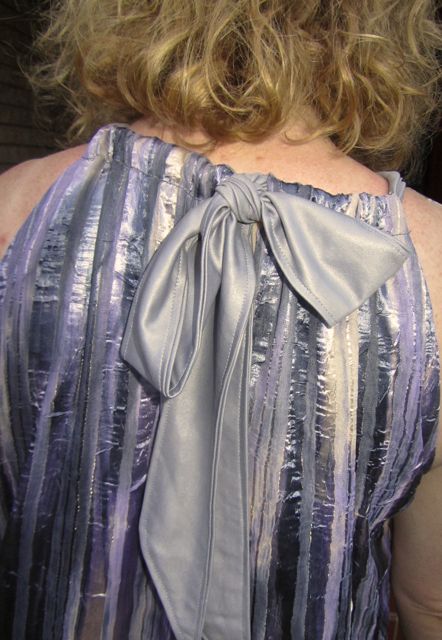 I added a little drama to the hemline by hemming the top layer a couple of inches shorter than the bottom layer.
This is not a dress that can go just anywhere, but so far I have worn it to a wedding that had an outdoor reception and to an art show opening night.  It does have a little bit of "caveman chic" going for it.  But it's fun and comfortable and forgiving, and just the thing for hot summer nights here in Texas.

Sometimes these nights are windy, too:) 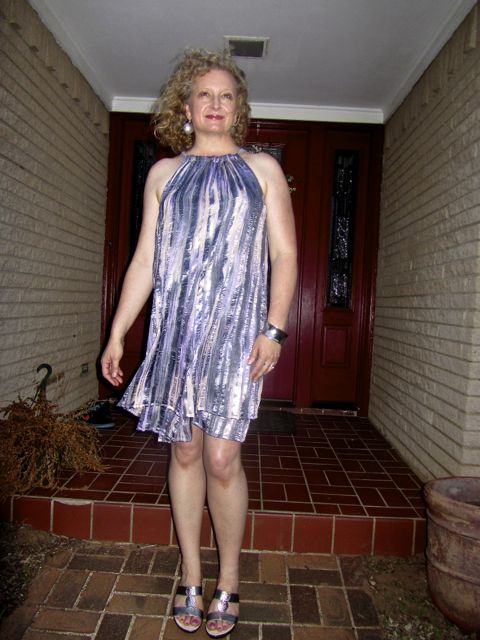 I love to hear from you! Thanks for leaving a comment :) I've turned off anonymous comments due to spam. If you would like to leave a comment and can't, send me an email.

Angela
I am a Christian, a wife, a mother, a daughter, a sister, a friend. I live in a 1960s ranch house with my husband, five children, two dogs, two gerbils, some fish, and two sheep. In the midst of this chaos, I find a little sanity in making things.......or at least in thinking about making things :)